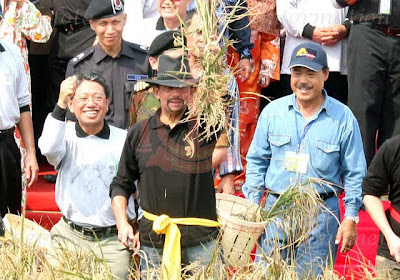 Brunei Darussalam has set in motion a large scale padi planting initiative toward increasing the local rice production. This involves expansion of cultivation areas from the present 1,300 hectares to nearly 4,500 hectares by 2010 to achieve 20 percent self-sufficiency AND to nearly 10,000 hectares by 2015 to achieve 60 percent self-sufficiency. His Majesty Sultan Haji Hassanal Bolkiah Mu'izzaddin Waddaulah, the Sultan and Yang Di-Pertuan of Brunei Darussalam consented to launch the project called "Cultivation of padi toward achieving self-sufficiency in rice production in Brunei Darussalam, and to declare a new name for the local rice". The launching ceremony took place yesterday morning at the Wasan Padi Farm at Kampong Wasan in the Brunei Muara District. 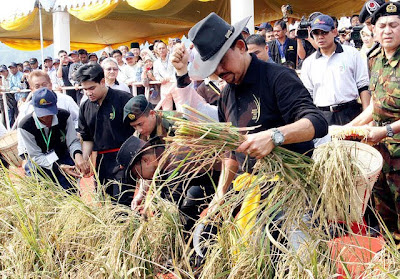 The Minister of Industry and Primary Resources in his welcoming address said among other things that the cultivation of rice on a large scale represents an initial step in responding to His Majesty's Titah toward planning and implementing a national agriculture strategy and policy to ensure food security for the nation and people. Yang Berhormat said this initial step involves several approaches including upgrading of farm infrastructure especially of drainage and irrigation system, roads and other related infrastructure. These efforts also include the introduction of a high yield Padi variety.

His Majesty then proceeded to launch the project thus marking the commencement of efforts toward Brunei's phased targets of achieving self-sufficiency in the domestic requirement for rice, starting at 20 percent self-sufficiency by next year and declared a new name for the local rice BDR One, which is now known as "Beras Laila."

His Majesty then toured the seedlings nursery and to plant a padi variety researched jointly by Brunei Darussalam and the Republic of Philippines. His Majesty and the Philippine Secretary of Agriculture, the Honourable Arthur Yap, jointly planted the padi using the drum seeder. The government of His Majesty has provided nearly five hectares of land for this collaboration to cultivate seven varieties of padi. This kind of collaboration also represents Brunei Darussalam's efforts towards further enhancing cooperative relations with other countries.

His Majesty subsequently proceeded to join padi planting activity at a local padi farmers cultivation site using a moden technology in the form of padi transplanter. In implementing this project, the Ministry of Industry and Primary Resources would constantly monitor these agriculture development areas especially to ensure that farmers practise a sistematic padi cultivation management such as simultaneous planting in all areas as well as practise cultivation disease control. The demand for rice as a staple food in Brunei Darussalam is expected to increase abreast of the growth in population which averages between one point five percent and two percent annually.

This was followed with His Majesty visiting an exhibition on Food Security and farm infrastructure provision for the Wasan and Bebuloh areas as well as on research activities by the Philippines Rice Institute, Philrice. The government of His Majesty is aware that market prices desired by consumers and market prices needed by farmers differ. What needs to be understood by the population is that the government in endeavouring to balance the two needs shoulders a heavy financial burden in the form of subsidies. The subsidies that are provided directly are by setting suitable market prices and indirectly through various assistance in raw materials such as fertilizers, pesticides and machineries as well as other basic assistance the like of basic agriculture infrastructure.

Photos and article courtesy of Department of Agriculture & Agrifood Brunei

This blog was created for the purposes of documenting the events and inner workings of our small-medium rice farm and the surrounding farming community for later perusal or reference.

What started out as a 'hobby-ish' subsistence rice farming, our farm is now experimenting and cultivating diverse varieties of rice that yield faster and better than the traditional local grain to accommodate some of the constantly increasing demand for fresh 'organic' rice.

Due to anticipated time constraints, updates to this blog will be most infrequent and very far apart.

"...If a rice producing country that already has capability to achieve 70% of its domestic rice requirement is still striving to formulate policies to achieve 100% self-sufficiency, why is it that we, only achieving at 3.12% not exerting enough effort to increase our national rice production? If I may recall, I have been emphasizing on this matter for the past years. It is most appropriate now that we should have our own strategic plan and national agriculture policy, amongst other things, that will guarantee national food security as one of its key strategies..."