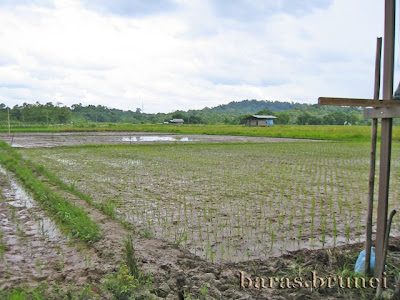 'Tis the end of season for the cultivation of Baras Brunei, and after a really good Pusu harvest it's time to cultivate other varieties of rice to fill the off-season gap. The off-season period is the opportune time to cultivate the faster growing/yielding rice varieties such as the IR64 Super Indonesian rice (medium grain) and IR74 Filipino rice (Beras Laila genus), both can be harvested after three months of planting and can be cultivated anytime during the year regardless of the season as long as water is available. 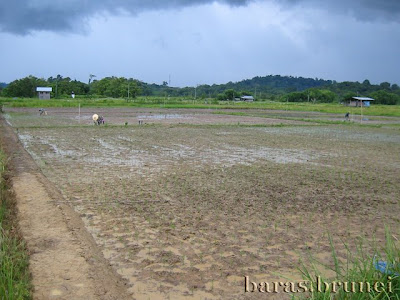 With Brunei's considerable wet climate, there is ample rain for cultivating rice all year round. But as I've mentioned before, farming Baras Pusu outside it's normal cultivation season (Oct-Apr) will result in crop failure, as had been experimented by some of the neighbouring farmers.
Availability of water is crucial at the very most during rice planting. Just as plants go, the transplanted seedlings need to be kept sufficiently moist until they have grown hardy enough to sustain on their own (about 1 month+).

Seedlings also need to be planted firmly into the soil in clusters of 3-5 to prevent strong winds from uprooting them. Planting them in clusters will also lower the chance of crop failure. Planting in square foot grids makes it easier to move around when it comes time to fertilise and harvest the padi. 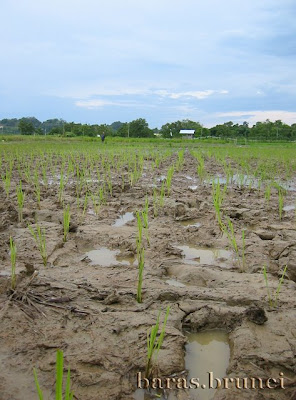 This blog was created for the purposes of documenting the events and inner workings of our small-medium rice farm and the surrounding farming community for later perusal or reference.

What started out as a 'hobby-ish' subsistence rice farming, our farm is now experimenting and cultivating diverse varieties of rice that yield faster and better than the traditional local grain to accommodate some of the constantly increasing demand for fresh 'organic' rice.

Due to anticipated time constraints, updates to this blog will be most infrequent and very far apart.

"...If a rice producing country that already has capability to achieve 70% of its domestic rice requirement is still striving to formulate policies to achieve 100% self-sufficiency, why is it that we, only achieving at 3.12% not exerting enough effort to increase our national rice production? If I may recall, I have been emphasizing on this matter for the past years. It is most appropriate now that we should have our own strategic plan and national agriculture policy, amongst other things, that will guarantee national food security as one of its key strategies..."